Our Norwegian Scandinavian cruise departed from Copenhagen, Denmark, on a Monday, so the hubby and decided we would fly down on Saturday and give ourselves some time to explore all that Copenhagen had to offer.

We got in on Saturday around 4pm, and we picked up our Copenhagen Card at the designated kiosk upon our arrival. (We didn’t find the directions to be super clear, but a nice fellow at the information desk pointed us in the right direction. We only went in circles a couple of times. ;)) 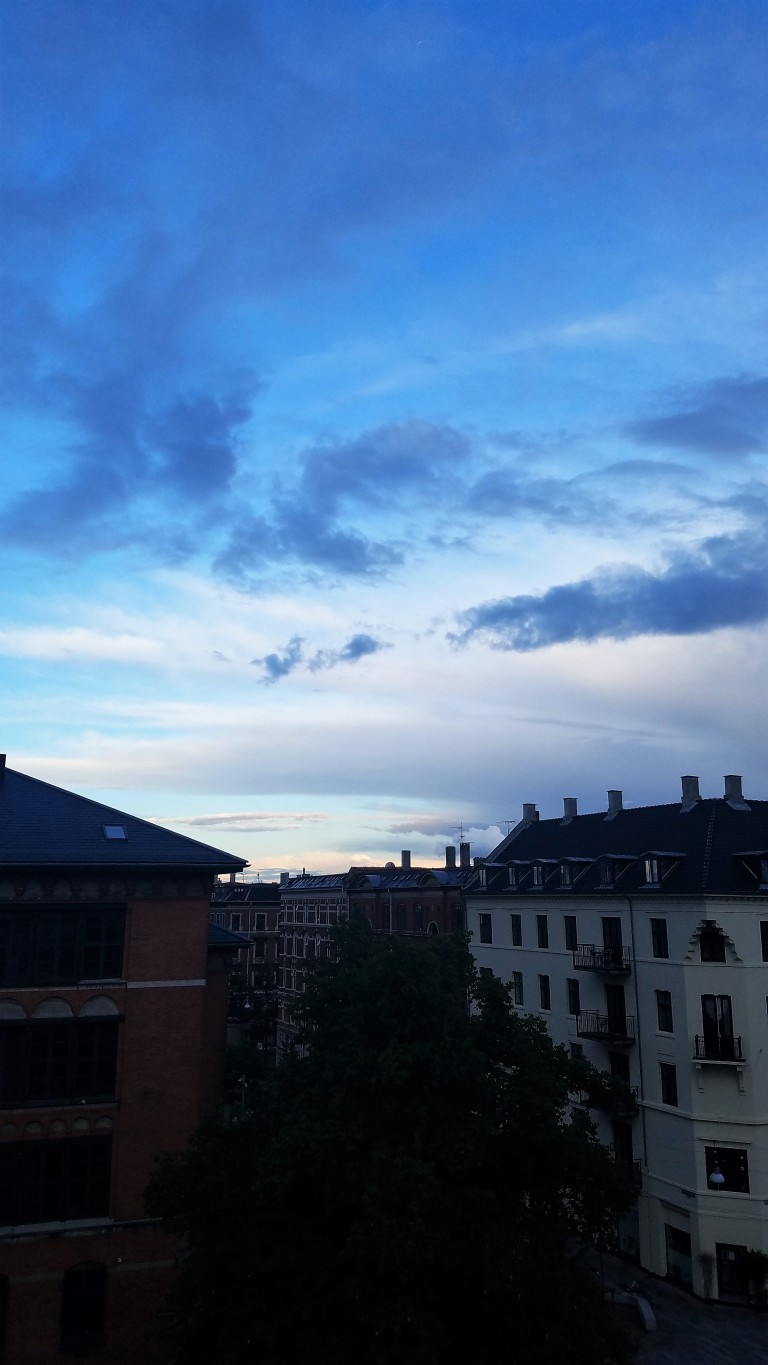 This was the view from our Airbnb our first night in Copenhagen. The sky was gorgeous.

The Copenhagen card granted us unlimited bus and metro rides for 48 hours, so we took the train to our lovely Airbnb (the train system connected to the airport was a little confusing, too, but I partially blame jet lag; we didn’t get much rest on the flight over, or so I tell myself to make our ineptitude ring a little better in my ears).

This was my favorite place in the whole apartment. I would sit there and drink my tea in the mornings. 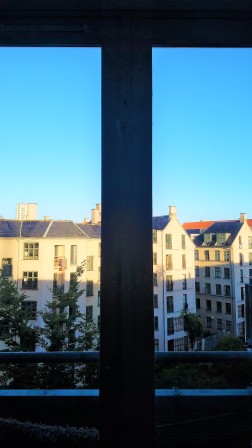 The view from our Airbnb’s kitchen. Somehow everything’s dreamier in Europe. 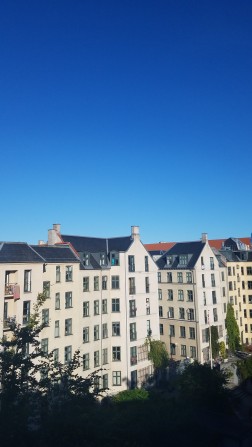 I cannot say enough about our Airbnb! It was light and airy and lovingly decorated and easy to find. It was super easy to pick up the key and our host, Ben, left us some guides on where to eat and things to do. There was a table in the kitchen where I enjoyed peaceful cups of tea in the mornings. There was a bus stop just a few streets over, so it was easy to hop on the next morning to head to the town square for our free walking tour. 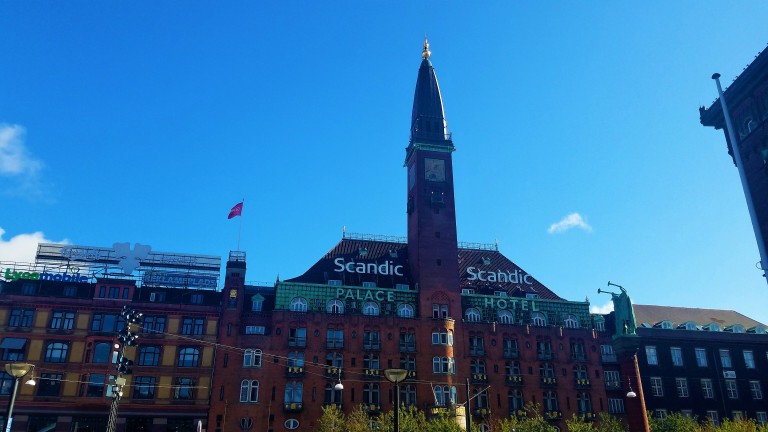 On our walking tour, we learned a lot about the city’s history of burning down. Seriously, it’s insane how many times the old buildings in Copenhagen have been burnt and rebuilt. It took them a while to wise up and not build their houses from wood, apparently. We also learned about the Carlsberg beer company, which pretty much has a monopoly on the beer industry in Denmark. But J.C. Jacobsen, the guy who started Carlsberg, was very generous with his brewing knowledge and shared it far and wide; he also invested a lot in the science and innovation of beer-making. You can read more about the Carlsberg empire here if that’s something that interests you. 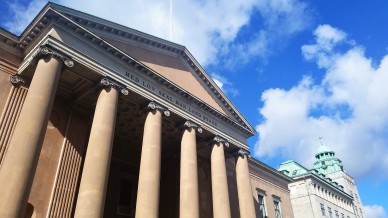 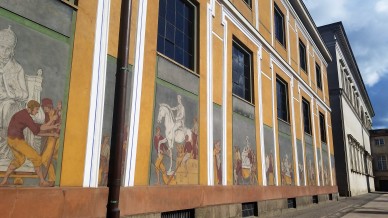 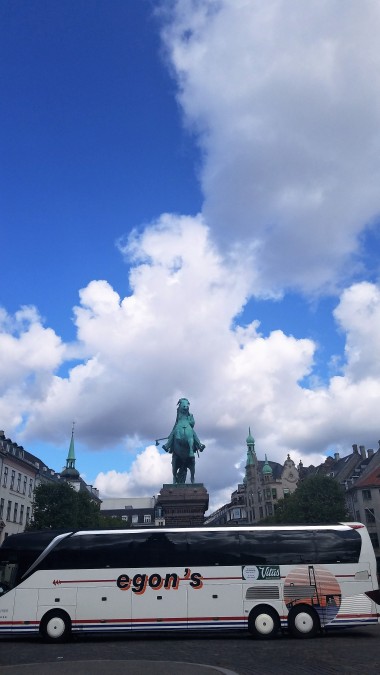 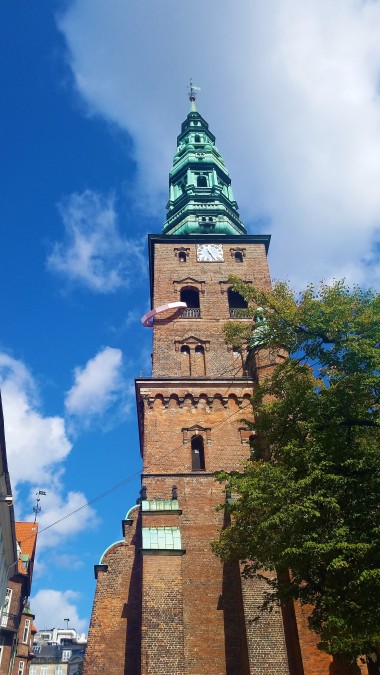 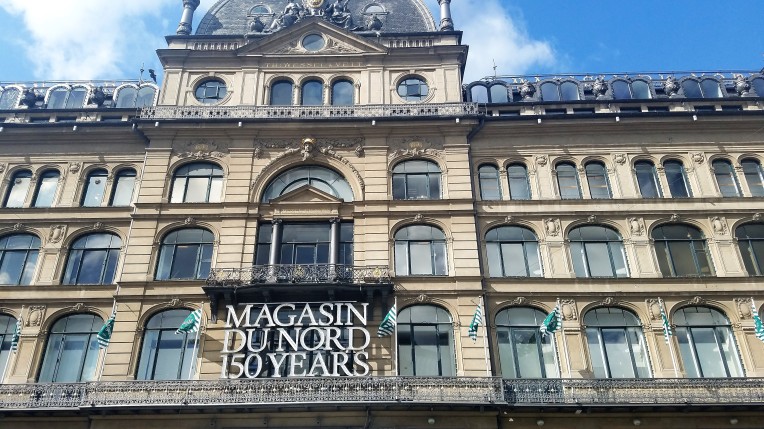 Our guide, Simon, also taught us about hygge, which the Danish credit as the key to their happiness. Danes are known to be some the happiest people in the world, despite living in what sounds like an awful climate with very little sunshine all year round (and I thought we had it bad in Michigan!), and if you ask them, they’ll tell you it’s because of hygge. In its simplest terms, it means “cozy,” but it’s really more than that—it’s a lifestyle. If you want to know more about this magic, you can read more about it here. 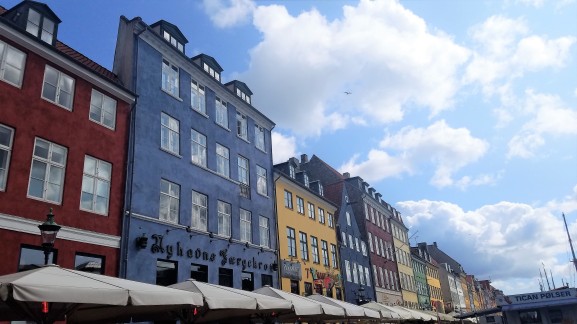 When in Denmark, eat a Danish (duh). This one was lemony and delicious.

We stopped in Nyhavn, the charming and colorful canalside neighborhood you’ve probably seen in a million pictures of Copenhagen. It’s lined on one side with many restaurants, canal tours are run out of there, and there are some vendors’ stalls there, too: We bought a lemon-custard Danish (because when in Denmark, you must eat a Danish) and it was freaking delicious.

(We returned to Nyhavn for a few hours in between our ship docking and our plane home at the end of our trip, and it was sunny and warm and so lovely. We bought fresh lemonade from a vendor and sat canalside for a little while just watching the boats go by. It was the perfect way to while away a few hours in limbo. Oh, and we grabbed some traditional Danish hotdogs from døp hot dog stand while we were at it [it’s super convenient; you’ll find it on Strøget, the world’s longest pedestrian street]. Let me tell you, it was the most delicious hot dog I’ve ever had in my entire life. It had onions and fried onions and pickles on top with ketchup and mustard and it was heavenly.) 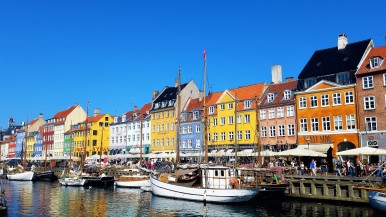 A random walkway off of the pedestrian street; the lovely patio is to the right.

We found this lovely enclosed patio space in an alley off the pedestrian street. It was SO DREAMY.

We ended our free walking tour at Amalienborg, the palace of the Danish royal family. And we were lucky, too, because Queen Margrethe was in residence while we were there, so we got to see the royal processional through the cobblestone streets on their way to the palace, followed by the elaborate changing of the guards. (These guards aren’t messing around, either. You can’t get too close to them, and they have bayonets on their guns, so why would you want to get close to them? But you’d be surprised how many people had to be sternly told to back off.)

I wouldn’t say it was the best walking tour I’ve ever been on, but our guide was very informative and funny—and hey, it was free, so I can’t really complain all that much, can I? I will say, it was super convenient that he had a card reader on hand for tips—I wish they all did this so I wouldn’t have to carry cash! Plus, the tour gave us the lay of the land and made it easier for us to navigate around a truly lovely town.

In next week’s post, I’ll tell you about the things we did via the Copenhagen Card, and, more importantly, whether I thought that it was worth it! Stay tuned! 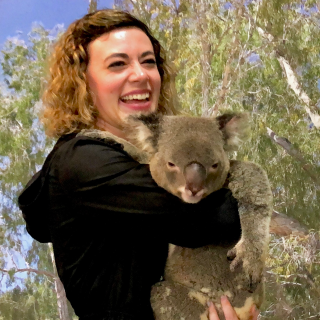