Funny story: My maiden name is “Liening” (pronounced “leaning”), so you can only imagine the “leaning tower of Pisa” jokes I’ve gotten throughout the years. (So original, right guys? Cue eyeroll.) My seventh-grade math teacher would even lean to the side when he’d see me in the hallway. (He thought he was hilarious.)

I suppose that’s neither here nor there now that I’m a Maynard, BUT on the off-chance that someone I used to know whips out that old joke, I can at least say I’ve been to Pisa—so there!

Okay, not exactly a sick burn, but I HAVE been to Pisa twice now. I did the exact same half-day excursion to Pisa from Florence both times, primarily because it’s relatively inexpensive at $77, and that includes transportation (a 1.5-hour bus ride), an English-speaking local guide in Pisa, and skip-the-line entry to the leaning tower. Sometimes I choose to do an excursion simply for the ease of it—it’s one less thing I have to plan; I just have to show up!

I’ll be straight with you: the tour itself isn’t anything to write home about. It’s a large group, it’s sort of impersonal, and the guide provided by Caf Tour & Travel is really just there to get you on the bus, from the parking lot in Pisa to the town center, and then back to the bus.

Your local guide will take you into the Pisa Cathedral, which caught fire in 1595, to devastating effect. When the church was rebuilt, the ceiling was entirely decorated in gold leaf (see below, top right), and toward the center of the church resides the intricately-carved pulpit of Nicola Pisano in the Baptistery of Pisa, which miraculously survived the fire (see below, bottom). 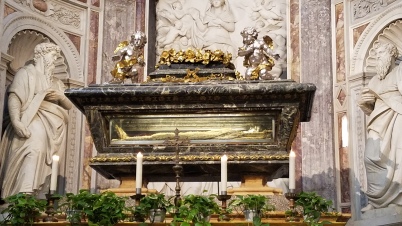 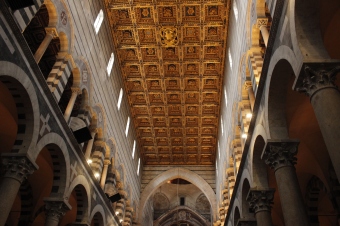 Why, yes, that is a sold gold ceiling. How’d you guess? 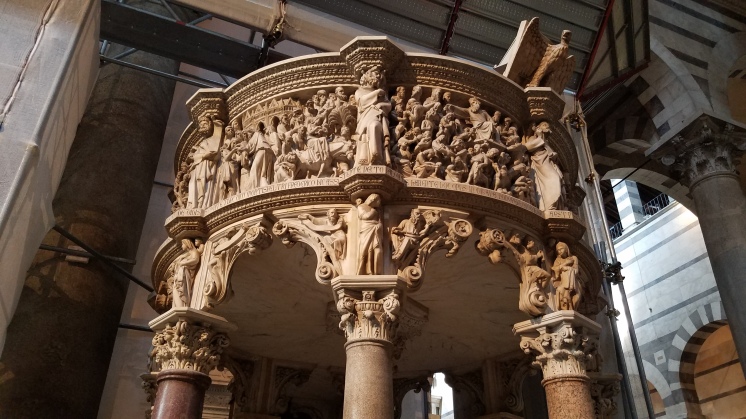 You’ll then go outside, where the local guide will give you some information about the tower and answer the question, why does the tower lean?!, followed by: is it actually safe to go inside?

1) Actually, all of the buildings in Piazza dei Miracoli are “leaning.” Why? Because the soil is so soft. The tower has actually shifted directions several times throughout the course of history as the ground moved beneath it, and the multiple stages of construction on the tower attempted to counteract the lean by making the floors taller.

2) Scientists have confirmed through various scientific tests and theories that the tower has stabilized and is safe to go inside. 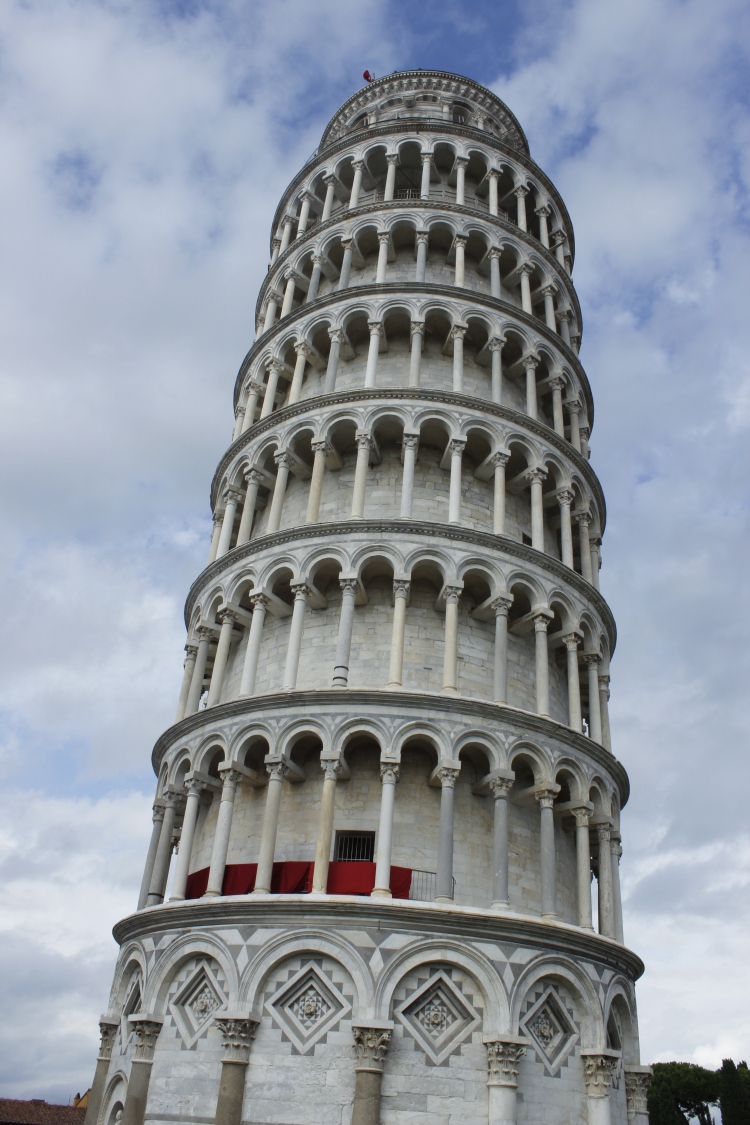 It’s an interesting experience going all the way to the top of the tower. The views of Pisa from up there are pretty awesome. Also, your equilibrium is way off when you step out of the tower; it’s super disorienting.

The skip-the-line ticket you get as part of the tour is super-handy; you’re assigned a specific time, and you go up with little or no fanfare, aside from getting security-wanded at the door.

1) You do have to go to the coatroom and check any bags you have on you. You can’t have any purses, backpacks, camera cases, umbrellas, etc., with you when you go inside the tower. The bag check is complimentary, so at least it doesn’t cost extra, but it is a tiny hassle to have to deal with that prior to going up, up, up. 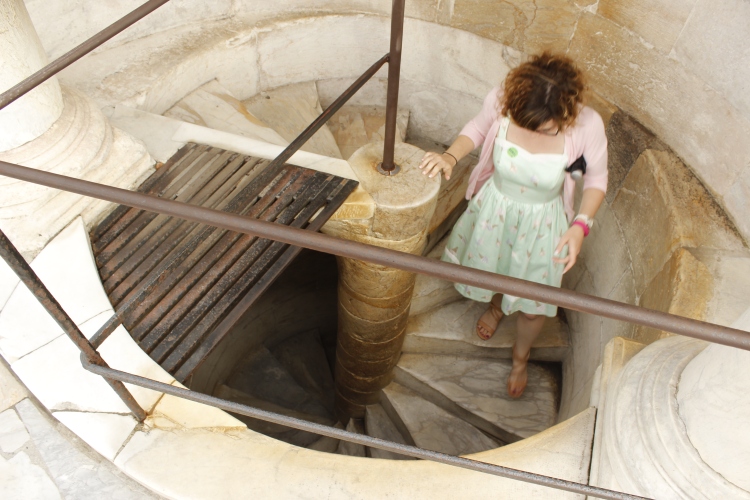 2) There are 284 steps in the tower, so, you know, be prepared to be a bit winded by the time you reach the top. Also make sure you wear decent shoes—or at least take your time going up—because the marble is a bit slippery in places, worn in the center where millions of people have trod before you. 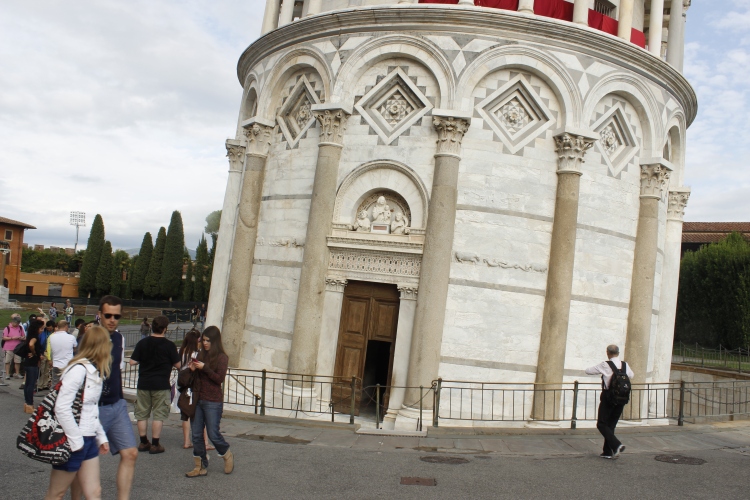 If you have time while you’re in Tuscany or Florence, visiting the leaning tower of Pisa is a worthwhile experience, but if you’re limited on time, I wouldn’t necessarily qualify this as a MUST-DO.

You certainly don’t need more than a couple of hours in Pisa, though, if you’re wondering just how much time you should set aside for this. Aside from wandering through the church and going up the tower, there’s not much to do aside from watch hundreds of tourists attempt the token “look! I’m holding up the tower” photos (see my husband’s attempts below). Which, let’s be honest, can be pretty amusing, but you can only watch that for so long, am I right? 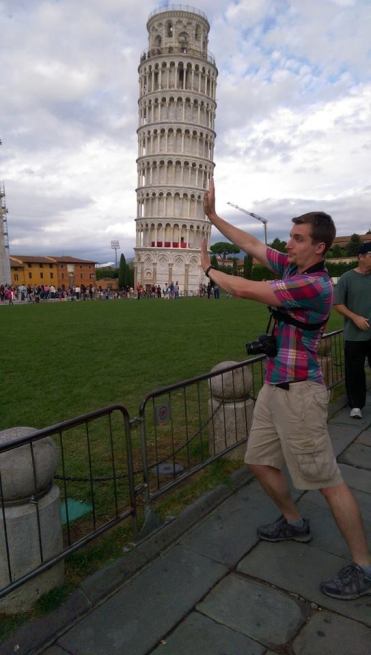 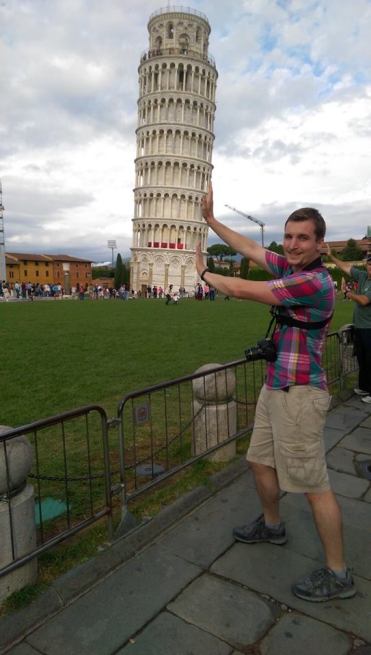