Even if you’re not super-Catholic, it is worth checking out the Vatican if you’re in Rome for a few days.

I would recommend, however, that you do a guided tour, so that you know what you’re looking at, and so you can learn the history behind the different rooms and artworks (if you’re interested in that kind of thing). We did this Skip-the-Line Vatican Tour.

A couple words of warning: Be prepared to have your space invaded. As you can see, it’s wall-to-wall people in that place.

It’s basically like 2-3 hours of you shuffling along with a headset in your ears (but hey, I reached my steps for the day just walking the Vatican alone, so I guess that’s something, even if they were tiny steps).

The Vatican is incredibly gaudy, yet somehow manages to still be beautiful. It’s hard not to be super impressed with the Sistine Chapel in particular. When you’re standing there, staring up at the ceiling, it’s mind-boggling that one man begrudgingly laid upon scaffolding for four years to complete it.

TIP: Don’t talk in the Sistine Chapel. The scary security dudes will aggressively shush you (because that’s better than people whispering, apparently).

TIP: Make sure your shoulders are covered. They’re pretty strict about that at the Vatican. (My jean jacket slipped off one shoulder as I was going inside, and a dude was immediately like don’t be such a harlot and to cover up your shoulder for God’s sakes.) 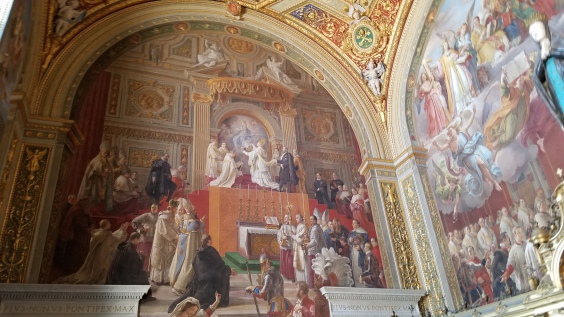 At the end of the tour, you’ll visit St. Peter’s Basilica, which is a marvel unto itself, really, particularly because it houses the “miracle pope.” (I think it’s [interesting-]creepy, but when I declared it “creepy” on my Facebook page, a hardcore Catholic immediately chastised me: “It’s not creepy, it’s a MIRACLE.” Creepy, miracle, whatever, it’s still a dead person on display for millions of people to gawk over.) 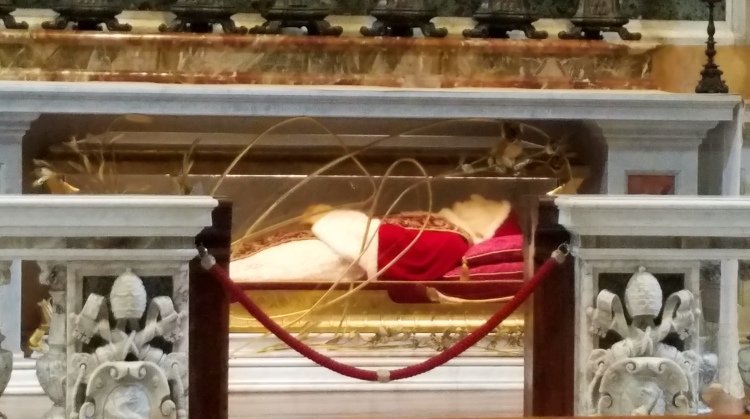 Yes, that is a person in there. Not just any person, but the aforementioned “miracle pope.” Legend has it they opened Pope John XXIII’s casket and he was completely preserved, the way you see him above.

I will say, this was my second time shuffling through the Vatican and St. Peter’s Basilica, and if I’m being honest, once was probably enough. I just happened to be traveling with people who’d never been to Italy before, and the Vatican is definitely worth seeing once in your lifetime.

Have you been to the Vatican? What did you think? Was it awesome or overrated?